Capital of the prefecture, built on the entrance of the Gulf of Amvrakikos. A modern city, administrative, commercial, intellectual and tourist center of the prefecture. Beautiful, traditional buildings adorn the port and the historical center while the pedestrian walkways and cobblestone streets lined with popular taverns and cafès remind us of the islands. The city’s rich intellectual and artistic activities include frequent conferences, exhibitions and festivals.
Preveza is built on the location of ancient Vereniki which was founded by Pyrrhus, the king of Epirus,in 290 B.C. to honor his mother-in-law, Vereniki. The city was established towards the late 11th century, after Nikopolis was deserted. Many conquerors passed through the city until it was finally incorporated with Greece in 1912. Its port offers connections to the islands of the Ionian sea.

At Nikopolis, 7 km N, an extremely important archaeological site founded by Octavius Augustus, in honor of his victory in the naval battle against Antony and Cleopatra at Aktio (31 B.C.). It was built upon a 3.5 km wide “cleft” between the Amvrakikos lagoon of Mazoma and the Ionian Sea. During Roman years, it flourished as the capital, administrative and ecclesiastic centre of the Roman province of Old Epirus. The city was deserted after the Bulgarians invaded it in the early 10th century. Among others, the archaeological site includes Roman walls, a conservatory and theatre (1st century A.D.), Augustus’ Monument, the Nymphaeum, the Byzantine walls, a Paleochristian villa and the Vasilospito, a Roman structure which was also used in Christian times

The temperate climate; the deep and cool sea waters; the mountains; the lush vegetation; the cultural heritage; and the cheerfulness of the inhabitants, make the Ionian Islands the ideal place for a holiday as well as rest and relaxation.
What is more, the traits of the Ionian Islands are perfectly combined with a flawless tourism infrastructure, excellent hotel accommodations, restaurants, diving centers, sea sports, cultural events, and a multitude of sights, historic monuments and museums worth visiting.

Scattered along the western coastline of Central Greece, the Ionian Islands as they are known, are an island cluster comprising twelve small and large islands whose total surface area comes to 2,200 square kilometers. Zakynthos, Ithaca, Corfu (Kerkyra),
Kefalonia, Lefkada, and Paxi are the six, large Ionian Islands.  Antipaxi, Erikousa, Mathraki, Othoni, Meganisi and the deserted islets of Strofades south of Zakynthos are the smaller Ionian Islands.

Together with the island of Kythira and the neighboring Antikythira the islands form the island cluster of Eptanisa. Nevertheless it should be noted that Kythira and Antikythira are completely cut off from the rest of the Ionian islands situated as they are across southern Peloponnese and the coast of Laconia.

Once, the Ionian Islands were part of Central Greece but were torn apart when the terrain sank due to the seismic activity along the great coastline fault of the Ionian Sea. This accounts not only for the ragged shores and hauntingly beautiful beaches but it also accounts for the islands’ tall mountains, once part of the Pindos mountain range which crosses Central Greece. It also accounts for the great depth of the waters in the area which, at 4,406 meters, is the greatest in the Mediterranean.

The Ionian islands have a mild and temperate climate which makes them the ideal location for vacation or residence.  In winter, the mountains of Central Greece stop the cold northern winds from reaching the islands while, in summer, the heat is tempered by the meltemia, the soft, northwestern winds, and the sea breezes.  Due to the air currents prevalent on the Ionian islands, many of the island beaches have developed into internationally acclaimed windsurfing centers.

The Ionian Islands have been inhabited since Paleolithic times, have been through many invasions, and have received the influence of a variety of cultures.

From the time of Frankish rule until 1864 when they were joined with Greece, the Ionian Islands were also ruled by a number of foreign conquerors.  The presence of the Europeans on the Ionian Islands at a time when Greece was still under Ottoman rule gave rise to significant intellectual activity something that is still visible today both in the islands’ architectural tradition as well as their charming cultural traits.

Find our app in Google Play

Find our app in App Store 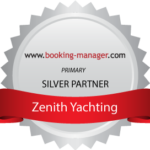